10 things to know about Poodle and German Shepherd Mix (Shepadoodle) 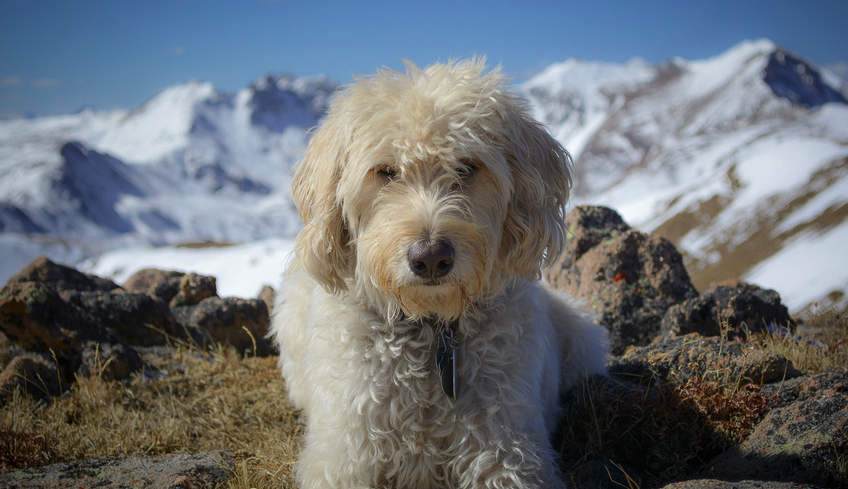 Poodle and German Shepherd Mix ( Everything You Need To Know)

The Shepadoodle is a trendy doodle that is a mix of German Shepherd and Poodle. The personalities of the Poodle and the German Shepherd are extremely different, but they come together to make quite a wonderful doodle.

These dogs are quite large, extremely fluffy, easy to train, hypoallergenic, and do not shed. Shepadoodles are also great family dogs, as they are great with children and are loving pets.

They are an increasingly popular doodle trending along with the Huskypoo, Golden Mountain Doodle, and Goldendoodle.

The Shepadoodle is a designer dog breed of a cross that is a poodle mixed with a German Shepherd.

These dogs were originally bred to help disabled people with pet allergies. The Shepadoodle has become increasingly popular since 2007.

The personalities of the Poodle and the German Shepherd are quite different and can be considered polar opposites.

The Poodle is hypoallergenic, does not shed, and is one of the smartest dogs in the world. In addition, the Poodle is considered to be tenacious and amazing in the water. 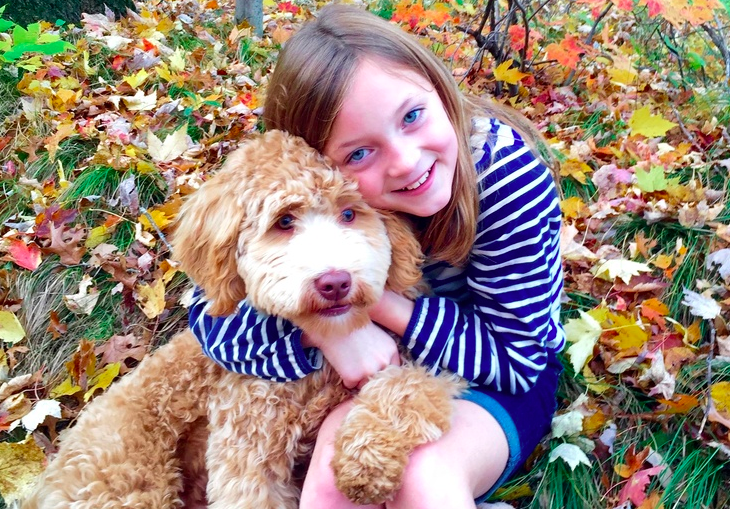 On the other side, the German Shepherd was originally a farm dog, which became popular after World War I in Germany.

Subsequently, German Shepherds branched out into police dogs, emotional support animals, and watchdogs because they were easy to train, loyal, and patient.

The combination of these two breeds of the dog brings out some of the best hybrid dog traits on the market: hypoallergenic, non-compulsive, intelligent, loving, and loyal.

According to the experts at We Love Doodles, Shepadoodles are high-energy and high-intelligence dogs; therefore, if you fail to exercise them properly, they may exhibit destructive behavior.

On the other hand, with proper training and care, the Shepadoodle can be your most loyal and fun companion.

As the name suggests, the German Shepherd dogs originated in Germany in the 1800s to herd animals and protect them from predators. They were strictly considered farm dogs and were not used as pets until around the First World War because of their obedient and loving attitudes.

As the German Shepherd’s popularity exploded, they became the preferred breed of dog for assisting the disabled, search and rescue, the military, and the police. The German Shepherd is the second dog registered by the American Kennel Club behind the Golden Retriever.

The Standard Poodle was also first discovered in Germany because of its waterproof coats, which were used for bird hunting and other water fetching.

Poodles are also one of the cleverest breeds of dogs, making fantastic pets, so several different variations began to emerge. You can find all the colors of pine in black, white, apricot, blue, grey, and more.

In addition, they come in a variety of sizes, from toy poodles to regular poodles.

They are also one of the most popular breeds registered with the AKC as they are considered hypoallergenic and non-shedding. This means that if you have any kind of pet allergy, this dog won’t help your allergies and make you sneeze all day.

Plus, they don’t shed fur all over the house and clothes, so you won’t have to vacuum daily. The only downside to the Poodle is that you’ll have to regularly lure them and give them haircuts.

In general, because the Shepadoodle is a cross between two dogs with different personality types, they are usually different. Generally speaking, the Doodles all have different colored coatings, temperaments, and characteristics.

Because each Shepadoodle is different, we can only make general assumptions about the breed. However, this is what makes each Poodle and German Shepherd mix unique and special.

The appearance of a Poodle and German Shepherd mix

Shepadoodle breeds can vary considerably in appearance. However, Shepadoodles most often have a combination of black and brown fur colors. In addition, they can also be tricolored black, brown, white, but can also be a single dark color.

Usually, you can get a good idea of what color the Poodle and German Shepherd are based on the body coat color of the parent poodle.

Since Poodle colors can vary greatly from white to apricot to black, you can usually narrow down what general color your dog will take based on the Poodle’s color.

However, this is not a guarantee and is simply a generalization, as some recessive traits can mask dominant ones, and you may end up with some uniquely colored Shepadoodles.

READ:   Can a Pitbull Live With Another Dog? - Why are pit bulls so aggressive?

As German Shepherds are usually black and brown, their color variations and genes vary less with each dog breed. Shepadoodles will almost always have a unique coat color for their litter.

Shepadoodles make high-energy dogs, as both the Poodle and the German Shepherd are energetic breeds, with high intelligence mixed with their high energy can create a wide range of behaviors.

If you do not properly exercise your dog, including regular walking, running, and stimulation, the Poodle/German Shepherd mix can exhibit destructive behavior around your house or garden.

This is because their minds get bored without physical as well as mental stimulation. However, these dogs are perfect for pet owners who live an active lifestyle or go to the dog parks regularly to play with other dogs. 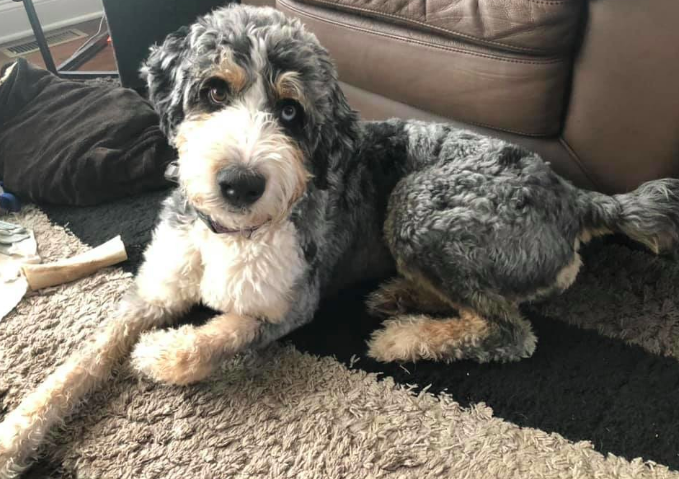 Shepadoodle coat types vary depending on the parents’ pedigree and whether they have more Poodle or more German Shepherd genetics. In addition, Shepadoodles with more poodle genetics have more curly coats that are hypoallergenic and do not shed.

Moreover, Shepadoodles with more German Shepherds have coats that are straighter and tend to shed more. Below are two of the most popular Poodle and German Shepherd mixes.

If you want to read a more in-depth look at the Doodle generations from F1 to F3 and learn the terminology, visit our article “Best Goldendoodle Generations.”

For starters, basic understanding of terminology is essential to understanding the Shepadoodle generation. First, the letter F stands for branch, which simply means your dog is a hybrid.

READ:   Why are dogs scared of vacuum cleaners? 7 Household items dogs are afraid of

And Finally, there may be a letter “B,” indicating that the breed has been re-bred (usually back-crossed with a poodle for hypoallergenic and non-hypoallergenic functions).

When people talk about having a Shepadoodle, it is likely to be an F1 Shepadoodle as it is a relatively new breed that is trendy.

However, as this is only the first generation of Shepadoodle, it is nearly impossible to predict correctly or to be sure of what type of traits and coat types they will have.

Typically, this will give a more localized and wavy coat, more like a poodle. Pet owners usually like Shepadoodle crossed with Poodle because it is hypoallergenic and not more detachable than F1 Shepadoodle.

These dogs are considered great pets for people who live in smaller houses, apartments, or condos and don’t really have a yard for their dog to run in public.

A dwarf or mini Shepadoodle is a medium-sized German Shepherd and poodle mix, usually between 35-45 pounds. The name also sounds a bit “off” since these are supposed to be mini dogs, but for a Shepadoodle breed, it’s actually quite small.

Thick and big German Shepherds can reach over 100 pounds, and poodles can be around 90 pounds; this is considered a mini Shepadoodle.

A standard Shepadoodle is any dog that is over 45 pounds and is the largest size of a German Shepherd and a poodle.

Is the Shepadoodle the right dog for me?

Shepadoodles are outstanding companions and provide the best qualities between a German Shepherd and a Poodle. They are also very easy to look after as long as you have the time to get enough use out of them.

Ideally, you should exercise your Poodle/German Shepherd mix for at least 1 hour a day and provide some form of mental stimulation indoors, such as chewing on the horns.

The downsides of Shepadoodles are that they require regular grooming, such as brushing and dog haircuts, as they grow hair instead of fur.

READ:   How to prevent my dog from peeing on my bed - 5 Things to Know

On the other side of this is that the Shepadoodle sheds significantly less fur than the German Shepherd Dog.

Moreover, German Shepherd and Poodle mixes are significantly better for people with any type of animal allergy, whereas the Shepadoodle tends to be more hypoallergenic.

Shepadoodles are also not pedigree dogs, so they are outstanding dogs if you have a good dog with different qualities and characteristics.

Just remember that personality and temperament may vary between dogs, but there is a loving energy ball. If you’re looking for a loyal, obedient, intelligent, and loving dog, Shepadoodle is the dog for you.

Shepadoodles are a doodle breed mix of German Shepherd mixed with poodles. This creates a dog that is extremely loyal and a dog with less fur and a super-hypoallergenic coat.

Do Sheepadoodles have double body coats?

Sheepadoodles with a “sheepdog” type coat have a double coat with a long, hanging coat that is very susceptible to matting and mats. To prevent the coat from getting tangled, you should brush the coat daily with a medium to large pin.

Sheepadoodles are somewhat high-maintenance and will require long daily walks (or better yet, shedding) to keep them too playful at home.

How much does a Shepadoodle cost?

Why are Sheepadoodles so expensive?

Many Sheepadoodle breeders have waiting lists over a year long. This is due to the high demand for the Sheepadoodle.

Besides the regular costs of owning a dog (vet visits, food, training), you can expect to pay a lot to keep your Sheepadoodle well cared for.

How long can Shepadoodle be left alone?

If you have a puppy, it’s a different story. Puppies are very high-maintenance and need to go outside much more often than an adult dog. A Sheepadoodle puppy under 6 months old should not be left alone for more than 2 hours.

What is the lifespan of a Sheepadoodle?

The average Sheepadoodle has a lifespan of 12 to 15 years.

READ:   Why are White Pitbulls so hyperactive? Genetics & 7 Things to know

Is a male or female Sheepadoodle better?

Males are very family-oriented. … Females are also family-oriented but a little more independent. They are more task-oriented and watchful of the family, and more aware of their surroundings.

The female Sheepadoodle, like the males, is fantastic with children and other animals.

Nipping – this is true of almost all puppies, and the Sheepadoodle is no different. They love to chew on things, just about anything, furniture, rugs, shoes, etc.

What is the Sheepadoodle’s best dog food?

If you’re not really sure of the kind of food to start with, here are some of the brands we can recommend.

Dog Breeds: How to Choose a Pet For Your Family?