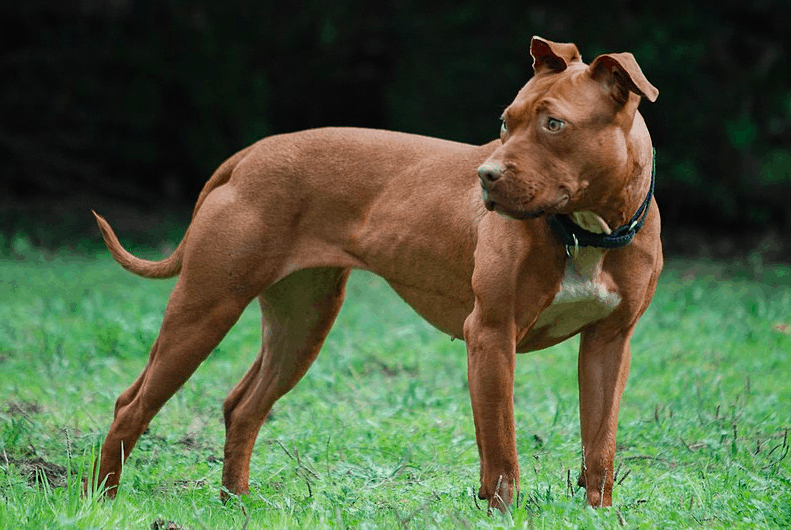 All you need to know about The American Pit Bull Terrier

The American Pit Bull Terrier is a breed of dog that is recognized by the United Kennel Club (UKC) and the American Dog Breeders Association, but not by the American Kennel Club. This is a medium-sized, intelligent, short-haired dog of a solid build whose early forefathers came from the British Isles.

The American Dog Breeders Association states that the American Pit Bull is medium in size and has a short coat and smooth, well-defined muscle structure. His eyes must be round to almond shaped, and his ears must be small to medium in length, typically half prick or rose in carriage.

About The American Pit Bull Terrier

The Pit Bull and terrier breeds were developed in early 19th century England for the popular spectator sports of bull and bear baiting. When these sports were considered inhumane and became illegal in 1835, dogfighting took their place – and with it, the characteristic of canine aggression that had entered the genetic line.

Another part of the breed’s genetic makeup is an unwillingness to bite people. Handlers who took to the dog fighting rings wanted to be able to separate dogs without injuring themselves. Soon, the breed developed a reputation as a strong, protective dog, but also known for being gentle and family-friendly.

As these “bulldogs” accompanied immigrants to America, they began a new career as all-around farm dogs. Their duties included hunting game, guarding the property from intruders, and providing companionship. In keeping with the “bigger is better” attitude of their new country, the settlers developed a dog that was larger than in England.

In 1898, the UKC, Britain’s equivalent of the AKC, named these bulldogs the American Pit Bull Terrier. The AKC decided to recognize the breed in the early 1930s – but under a new name. In an effort to separate it from its past as a pit fighter, the AKC named it the American Staffordshire Terrier.

How much do pit bull puppies cost?

In general, good breeders sell puppies with good bloodlines at starting prices from 2000 to 20000 US dollars. However, there are some decent bloodlines that you can get for as little as $800 – $1000.

The tail shall be slightly thick and tapered to a point. The ADBA shall be glossy, smooth, short and stiff. Many colors, color patterns, and color combinations are acceptable for the ADBA except that both the ADBA and UKC do not recognize merle coloring. Color patterns that are typical of the breed are solid and tuxedo.

In spite of the colloquial use of the term “pit bull” to refer to an entire category of dogs and the legal use of the term to include several breeds in legislation, several conservative professional breeders of the American Pit Bull Terrier, as well as some experts and supporters, claim that historically the APBT is the only true “pit bull” and the only breed that should be referred to as such.

The Australian state of New South Wales restricts the breed, including mandatory sterilization. The breed is banned in the United Kingdom, the Canadian province of Ontario, and many places in the United States.

Most American Pit Bull are fun-loving companions, gentle and patient with all their family members (with the very likely exception of other pit bulls). As with all breeds, there are exceptions.

Pit bulls were bred to be bold, fierce, and to continue doing whatever they do in the face of adversity. These traits make them stubborn, tenacious and fearless. As with any large dog, pit bulls should be supervised with children.

Life with a American Pit Bull is always an adventure. These are fun-loving dogs that are always up for a game. They must have an intense training period every day. Although they are tough dogs, they are not cold weather dogs and should be protected from the elements.

Pit bulls should be obedience trained as this is a good bonding activity. They are very often not good with other dogs, so they should be kept on a leash in their environment.

These dogs like people and have no idea that their size will deter a lap dog. Confident and very aware of their surroundings, they are watchdogs as they may alert you to the presence of strangers, but this is mainly because they want to greet “their” guests.

While their love for humans sets them up to fail as guard dogs, their courage is second to none and they will defend their family with their lives.

Like any dog, American Pit Bull Terriers need early socialization – exposure to many different people, sights, sounds and experiences – when they are young. Socialization helps ensure that your puppy grows up to be a well-rounded dog.

American Pit Bull Terriers are generally healthy, but as with all breeds, they are prone to certain health conditions. Not all American Pit Bulls Terriers will get one or all of these diseases, but it is important to be aware of them if you are considering this breed.

American Pit Bull Terriers are vulnerable to bacterial and viral infections – the very same ones that all dogs can get – such as parvo, rabies and distemper. Many of these infections can be prevented with vaccinations, which we are recommending based on the diseases seen in our area, their age, and other factors.

Obesity can be a very significant health problem in American Pit Bull Terriers. It is a very serious disease that can cause or worsen joint problems, metabolic and digestive disorders, back pain, and heart disease. Although it’s tempting to give your buddy food, when she looks at you with those soulful eyes, you can “love her to death” with leftovers and dog food. Instead, hug her, brush her fur or teeth, play a game with her, or take her for a walk. She’ll feel better and so will you!

READ:   How to Prevent Your Dog Aggressive Behavior Towards You

All kinds of worms and bugs can infiltrate your pit’s body inside and out. Everything from fleas and ticks to ear mites can infest her skin and ears. Hookworms, roundworms, heartworms and whipworms can enter their system in a variety of ways: They drink unclean water, walk on infected soil, or are bitten by an infected mosquito. Some of these parasites can be transmitted to you or a family member and are a serious problem for everyone. For your canine friend, these parasites can cause pain, discomfort and even death. Therefore, it is important that we test them regularly. We also recommend preventative medications as needed to keep them healthy.

The American Pit Bull Terrier serves as a working dog and is suitable for a variety of working disciplines due to its intelligence, high energy, and stamina. In the United States, they have been used as search and rescue dogs, police dogs that detect narcotics and explosives, border patrol dogs, hearing dogs to provide services to the deaf, and general service dogs, including therapy dogs.

In some locations, they are often a favorite dog for catching feral hogs. Although the Australian Royal Society for the Prevention of Cruelty to Animals (RSPCA) describes how dangerous this practice can be for hunting dogs, it notes that the dogs can suffer serious injuries, “heat exhaustion, poisoning, vehicle trauma, snakebite, and accidental shooting.”

How to Choose Between Adopting and Buying a Dog